Own Your Family
Rich Dad Poor Dad by Robert Kiyosaki

Part memoir, part financial guide – “Rich Dad Poor Dad” is arguably the most popular personal business book of all time. In it, Robert Kiyosaki contrasts the instruction he received from his real dad with the ones from his mentor, explains the differences between the mindsets of the poor and the rich, and champions the importance of financial literacy and financial independence.

Best suited for people who want to become financially literate and fill some moneymaking-related holes education systems can’t or won’t.

You can watch the full book summary of Rich Dad Poor Dad on the Own Your Family YouTube channel.

Robert Toru Kiyosaki is an American investor and entrepreneur. He is best known as the author of the perennial bestseller, “Rich Dad Poor Dad”, which turned his name into a brand, spawned a series of over 20 books, started a franchise of high-praised Rich Dad seminars and made Kiyosaki the subject of class action suits.

Rich Dad Poor Dad: What the Rich Teach Their Kids About Money That the Poor and Middle Class Do Not!

In April 2017, 20 years after its release, it has become the #1 personal finance book of all time. It has been translated into dozens of languages, and sold around the world, making it one of the best-selling books of all time.

It has become the #1 personal finance book of all time, translated into dozens of languages, and sold around the world!

This book isn’t just about money. It is about how we are taught by schools, family, friends, and society to look at the rich and successful as greedy no good blood suckers and opportunities as risks, and how we are programmed to look at ourselves as failures. It is an attempt at reprogramming minds to look at why do we do what we do…why do we buy all these things, clothes, cars, etc. Have we earned it or are just trying to maintain an appearance? To me the most important thing this book teaches is that being educated in your motives, in your goals, in your dreams is the key.

I’ve always wanted to read this book. After some recent events, I wanted to understand the thought processes of people who were raised rich and those who weren’t. The first chapter was fantastic. The storytelling was simple, and it made so much sense to my mind. It also made me relate to it. Then I began reading Lesson 2: Why Teach Financial Literate. It was this chapter where I realized that homeboy, Kiyosaki, is quite pompous. He was using specific examples to explain his points, and I didn’t agree with them at all. I understood that he was trying to teach people about money, but I felt like he was teaching them bad habits.

The concepts presented in this book are common sense and there aren’t any concrete applications to his ideas, but I think he’s onto something. Yes, the poor become poorer while the rich become richer, and there’s a groundbreaking idea! Yes, most of us don’t know how to handle our money, so how about telling all of us how?

This book is about the history of the Internet. It starts with the first networked computers in the 1960s and 1970s, then goes through the development of the ARPANET, the precursor to today’s Internet, and ends with the rise of the World Wide Web. It also covers the early days of the commercial Internet, including the birth of the commercial Internet service provider (ISP) and the growth of the Internet economy.

Robert Toru Kiyoski grew up in poverty. His father was an alcoholic and his mother was a drug addict. He was raised by his grandmother, who worked hard to provide him with a good education. His father was not around much, and when he was, he was often drunk and abusive. His father did not finish high school, and instead went to college and earned a PhD. His mother was also not around much, and she was a drug addict. She died when Robert was young.

The first dad believed that the love of money is the root of all evil. He worked hard to earn as much as he could, but instead of saving his earnings, he spent them on luxuries. When he died, he left nothing to his family, but he did leave a fortune to his church. The second dad earned a lot of money, but he didn’t spend any of it. He saved every penny and invested it wisely. He lived modestly and gave generously to charity. He died a wealthy man, leaving his family with a large inheritance.

Kiyosaki started out at the tender age of nine when he decided to ignore the guidance of the brilliant professor and follow the advice of the uneducated businessman who ran his own business. He learned six great lessons from his surrogate father. These lessons were later compiled into a book called “Rich Dad Poor Dad”.

Lesson No.1: The rich don’t just work for money

When Kiyosaki was just nine years old, his rich buddy Jimmy invited three of their common friends to his parents’ summer house, but not him — because he was poor. “Dad, can you tell us how to get rich?” he asked his dad that night. “Well, use your head,” his dad replied, smiling away the fact that there was no answer.

Kiyosaki wanted to learn more about business, so he asked his friend Mike if he could meet with his dad. His dad owned several warehouses, a construction firm, a chain of stores and three restaurants. He knew a lot about making money, so he offered Kiyosaki a job at a low wage. After three weeks, Kiyosaki realized he wasn’t learning anything, so he confronted his dad and asked for a raise. Little does he know that he had already learned the first lesson: life will always push you around, but while the rich give up or push back, the poor use the pushing to change into a better version of themself.

Lesson No.2: Why teach financial literacy

This is why so many talented people around our world struggle with managing their money. They work hard to earn money but don’t know how they will spend it once they have earned it. “What is missing from their educational system is not how to make more money,” says Kiyosaki, “but how to manage money.” It’s called financial literacy – what you do with your money once you’ve made it, how to keep other people from taking it away from you, how to make that money last longer, and how to turn that money into something useful.

Lesson No.3: Mind your own business.

If you’re looking to get rich, you need to focus on your asset column instead of your income statement. “Financial struggle is often the results of people working all their life for someone else,” writes Kiyosaki in Rich Dad Poor Dad. “So, start minding their own business. Keep your day job, but start buying REAL assets, not liabilities.” Assets fall into the following seven types:

Minding our own business means building and maintaining an asset column strong. Once a dollar goes into it we should never let it come out, because if we do, then we will lose it forever. Instead of working for our money, we should make it our employee. Money works 24/7 and can work for generations. We should not spend it, but invest it.

Lesson No.4: The history of taxes

If you work for money, then you give the power to the government. If money works for you, then you keep the power and the control. You can spend before you pay taxes.

Corporations are not real things, but they are a very important thing. A corporation is an entity that exists under law, and it is legally separate from its owners. It is also a legal fiction, meaning that it does not exist in reality. Corporations are often used to shield wealthy individuals from paying taxes, and they are also used to protect the assets of wealthy individuals from creditors.

It may sound dodgier than it actually is, but it’s nothing but financial intelligence which combines several skills and talents.

Lesson No.5: The rich invent money.

It’s never a choice, is it. Millions of people make the wrong choice because they are afraid of failing and want to avoid failure. “People who fear failure also avoid success, says Kiyosaki. Let yourself fail. Learn from your failures. “Smart” and “secure” investments won’t help you make money. In the real world, it’s the bold who succeed.

Start thinking outside the box. Find ways to get your ideas funded, organize smart people to put them into action, and invest your money in the idea. It’s risky, yes – but all things that really matter are. After all – it’s not like you could’ve known the person you love would say “yes” when you asked them out! But you did it anyway, even though you were scared.

Lesson No.6: Work to learn – not work for money

He chose to work to learn – even quitting a secure job in the Army and joining Xerox to be trained as a marketer and salesman. He knew that, besides managing your cash flow and systems, being successful is about managing other people. So, he went all in and became an owner of an Investment Company, and retired at the ripe old age of 47 as a multi-millionaire. Follow his advice – and you might too.

I hope you enjoyed reading and listening to our book summary of Rich Dad Poor Dad.

What did you like about our Rich Dad Poor Dad book summary? 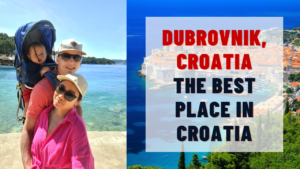 Dubrovnik, Croatia Family Travel 2020: What to Expect? Sharing Experiences! More with Own Your Family How this Filipino Entertainer in Tokyo, Japan Become a Successful Multi-Entrepreneur | Mari Nihei